We have been the heart of Turin since 1955

All newspapers have a history. Only La Stampa, Turin’s newspaper, has a heart: Specchio dei tempi, the column that has been giving readers a voice since 1955. A space for debate and sharing from which was born a non-profit foundation that transforms the generosity of thousands of donors into practical projects in favour of the weakest. 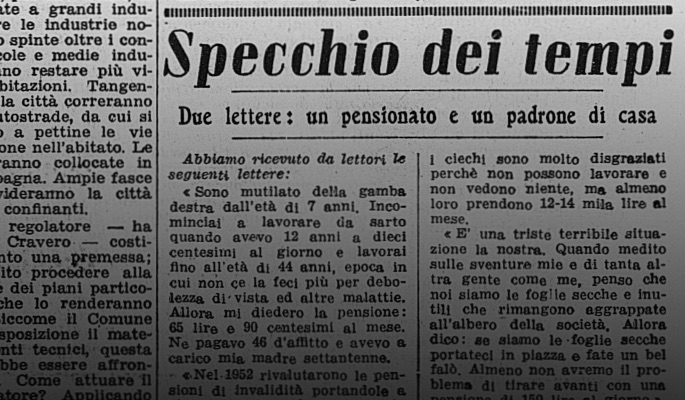 The column is born

On December 17, the director Giulio De Benedetti introduces the column Specchio dei tempi in La Stampa: a space reserved for readers who can write opinions, tell experiences, report injustices. But also offer their solidarity, moral and material, to needy families or victims of episodes of suffering. The first donations go to two children who lose their father in an accident in Turin, a tragedy told that day in the news. 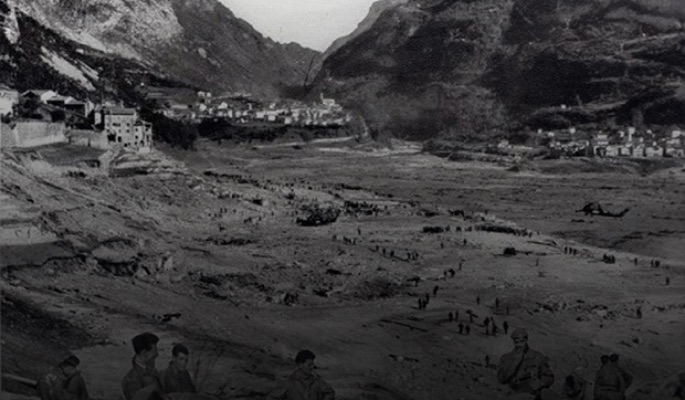 Over the years, readers decide to support populations overwhelmed by the most serious national and international disasters. The first major subscription is opened after the Vajont disaster, in which 1900 people die. The newspaper immediately begins a race against time to bring readers' aid to the people of Friuli. Specchio learns that in emergencies it is not enough to do well, things have to be done quickly. 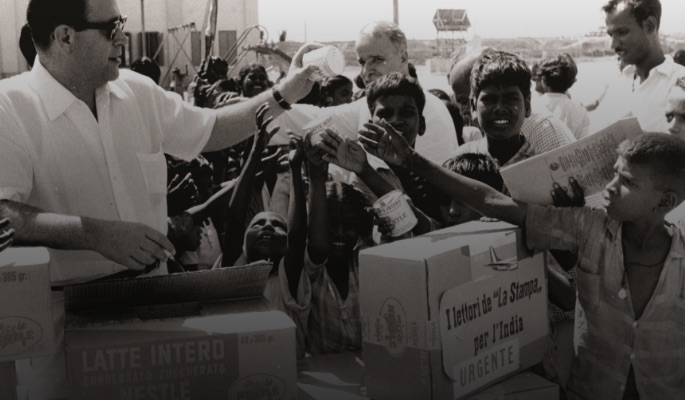 The famine in India

Europe is moved by the reports of hunger in India: the people of Turin are mobilized and in a month they collect almost one billion lire. Charter flights take off from Caselle airport loaded with food donated by the readers of La Stampa. It is the beginning of an extraordinary international solidarity story which will see Specchio dei tempi take a leading role in Africa, Asia and America, in the poorest countries of the world. From Haiti to Ecuador, via the Syrian refugee camps. 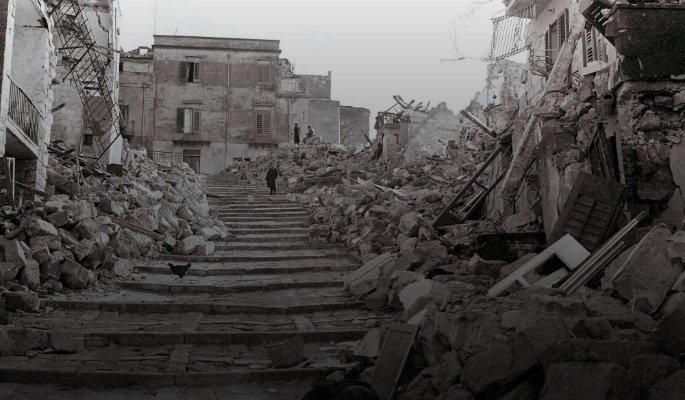 Sicily is on its knees: 16 shocks, 380 dead. A subscription is opened and five journalists begin to travel around the destroyed towns, to distribute cash, alleviate desperation and cover basic necessities. A receipt is made of each donation and then a long and detailed list. The 130 million euros that Specchio is able to collect in 1970 for the restoration of the famous San Marco bronze horses in Venice is managed with the same transparency. 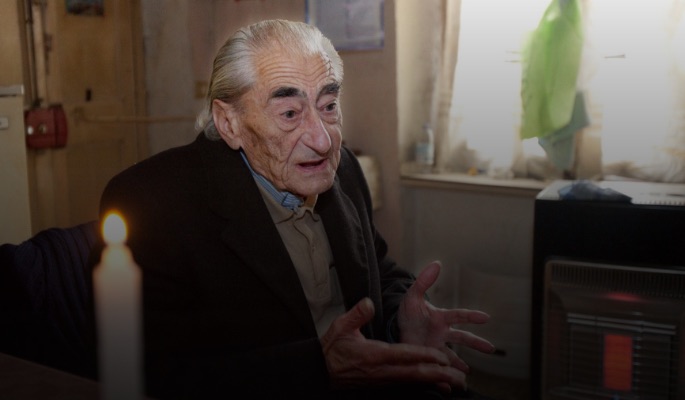 An institution dedicated to solidarity projects is created with the enthusiasm of readers and journalists: the La Stampa - Specchio dei tempi Foundation is born on February 24 and immediately launches the "Thirteenth Salaries of Friendship". An initiative that continues today and offers practical support to poor and lonely elderly people. The first contribution is 30,000 lire, given to 30 elderly people. By now the over 65’s involved in the project are 2000 every Christmas, and each one receives 500 euros, for a total of 1 million euros donated. 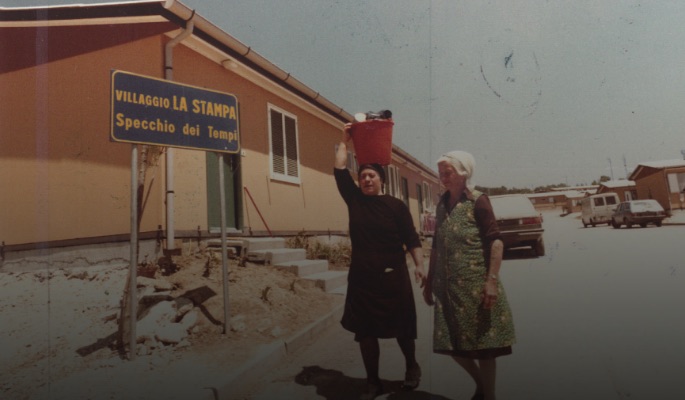 The earthquake in Irpinia

Three thousand dead, three hundred thousand displaced. Campania is devastated by a huge tragedy. Thanks to the generosity of the readers, a village with 70 houses is built in Lioni. Already four years earlier, in 1976, the foundation had mobilized for the earthquake in Friuli: columns of caravans loaded with aid had left from Piedmont. In the 70s and 80s, Specchio dei tempi specializes in bringing immediate help in emergencies and in 1988 it is recognized as a non-profit organization. 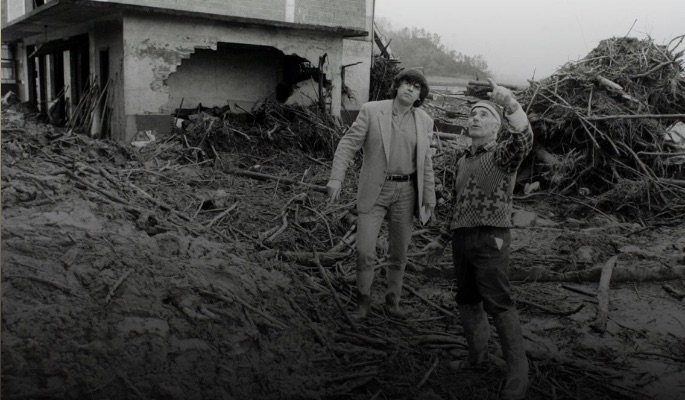 The flood in Piedmont

In early November, the geography of the provinces of Asti, Alessandria and Cuneo is overwhelmed by the fury of water and mud. The flood devastates Piedmont on the Tanaro axis, and the readers of La Stampa collect the record figure of 25 billion lire. The highest ever recorded in Italy with a non-television subscription. Bridges, schools, kindergartens: donations turn into dozens of projects. For months, Specchio's correspondents distribute envelopes with cash to the most desperate families. 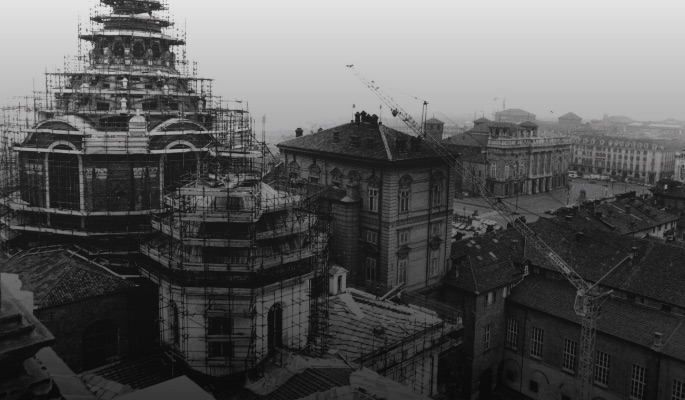 The Chapel of the Turin Shroud

A fire strikes in the heart of Turin: the Guarini chapel is on fire, the city is shocked and upset and once again Specchio dei tempi is there. 1.24 billion lire is donated, a fundamental support for the twenty-year restoration concluded in 2018 and directed by the Superintendency. Also in 1997, the foundation intervenes in Umbria and Marche, after the earthquake, rebuilding a school and outpatient clinics. 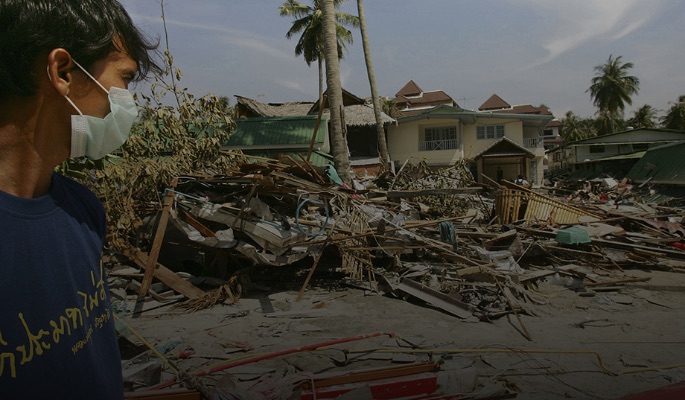 The Tsunami in Asia

The tsunami in Sri Lanka, Thailand and India brings Specchio to a new awareness: the possibility of intervening with multi-year initiatives also abroad. So the foundation decides to remain in Sri Lanka even after the emergency and to offer medical support to the injured, it builds a village consisting of five family houses. In 2012 the village is reconverted to host girls who are victims of abuse or neglect: our daily commitment against violence towards women. 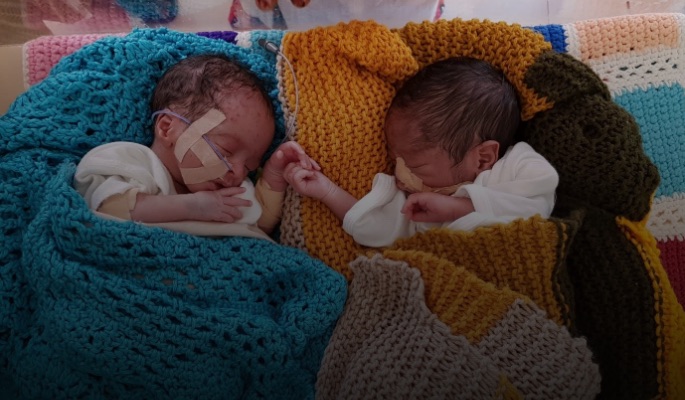 After the famine of 2011, Specchio decides to intervene in Somaliland and in 2012 opens a subscription to build a hospital in Hargeisa. Equipped with 45 beds and an emergency room, the facility is donated to the local government. In 2018 the non-profit organization creates another neonatology department and in 2019 we double our commitment in Africa by restructuring the schools of Nganzo, Rwanda. We activate a mobile clinic programme to treat Burma's children. 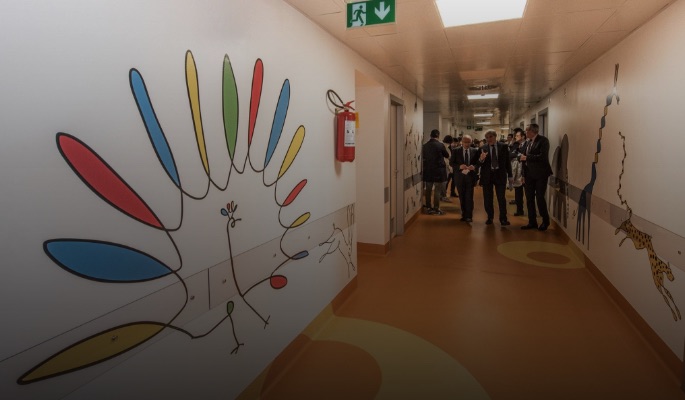 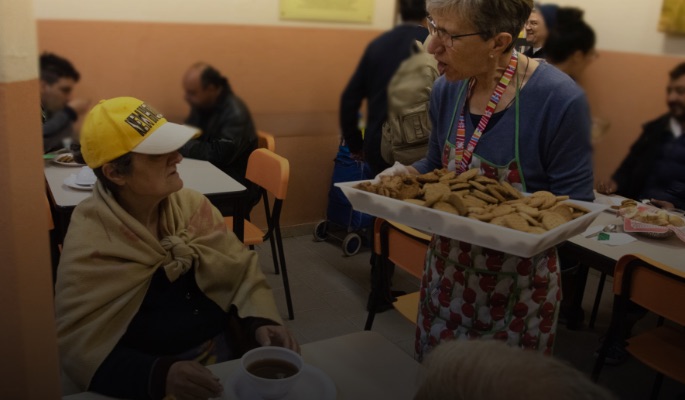 Breakfasts for the Poor

Thanks to the legacy and generosity of readers, Specchio begins a complex restructuring of the Turin children's hospital. First outpatient clinics, then cardiology, CPR and finally neuropsychiatry: in five years over 5 million euros are allocated to four different construction sites. In the summer of 2019, a child receives a heart transplant and is reborn, after over 500 days of hospitalization and a record intervention in the Specchio wards. 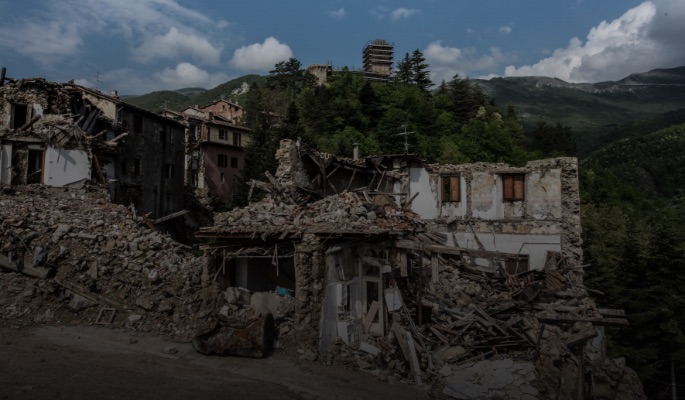 The earthquake in central Italy

After rebuilding the schools hit by the earthquake in Abruzzo and Emilia, Specchio adopts Arquata del Tronto, a municipality that in the summer of 2016 has 51 victims and is razed to the ground. Thanks to a collection of over 3 million euros, the foundation builds the school complex (2017) and the gym (2018) in record time; promotes a tender for small businesses (2019); and launches a family aid plan: for each infant, a cheque for 2 thousand euros. 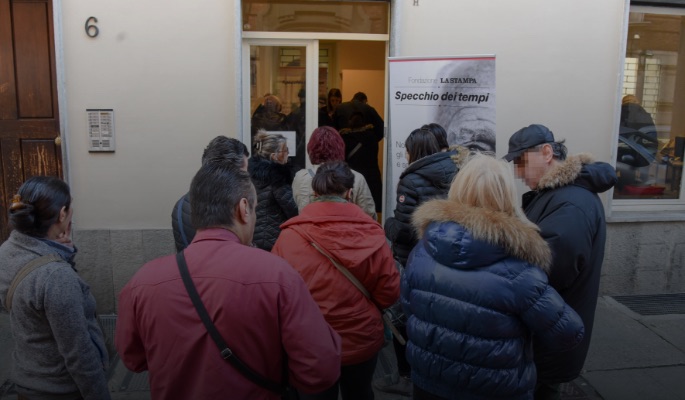 A help desk in the heart of the city. In via Santa Maria 6h in Turin, the "emergency room" of Specchio Point opens: a space where 12 needy families are welcomed every day. From bills to unpaid rents, problems are solved in a few hours. Especially those of single mothers, to whom a specific programme has been dedicated since 2017, which in addition to providing financial assistance promotes reintegration into the workplace. 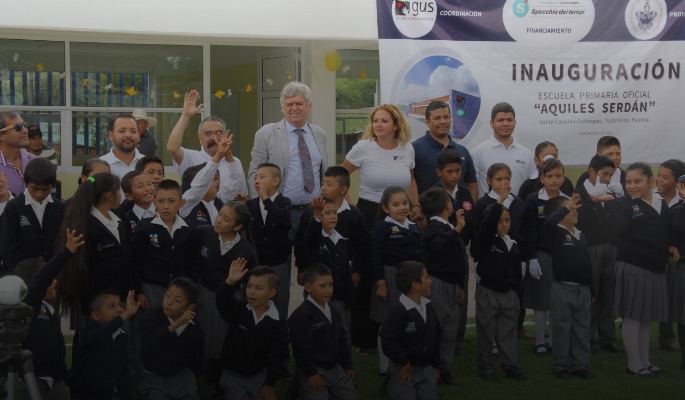 The school in Mexico

The twenty-sixth school rebuilt by Specchio dei tempi opens in September: it is located at the foot of a volcano, at 2000 meters, and welcomes 100 children of families, victims of the earthquake that rocked Mexico a year earlier. Thanks to the "Let's connect the children of the world" project, Mexican students make friends online with children from other Specchio schools: from that of Arquata to the one created in 2015 in Nepal, at 4000 meters, on the slopes of Everest. 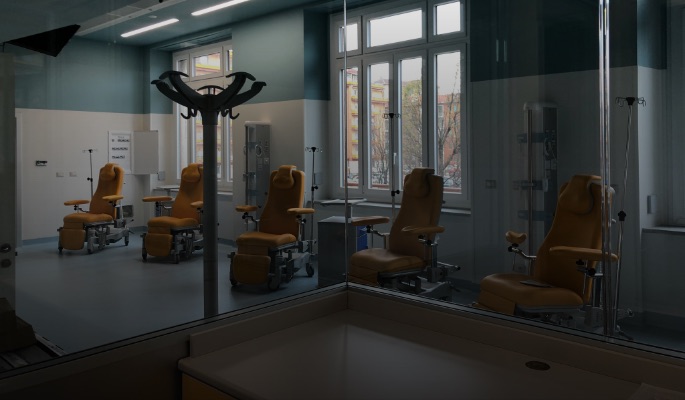 A 1.2 million euro commitment and a large construction site at the Sant'Anna hospital: to be at the side of women who are fighting cancer, Specchio dei tempi restructures the Turin oncology day hospital. The footballer Barbara Bonansea is chosen as the symbol of the battle against female cancer, the first testimonial of its history. In the same year, the radiology department of the Mauriziano Hospital of Turin is also renewed. 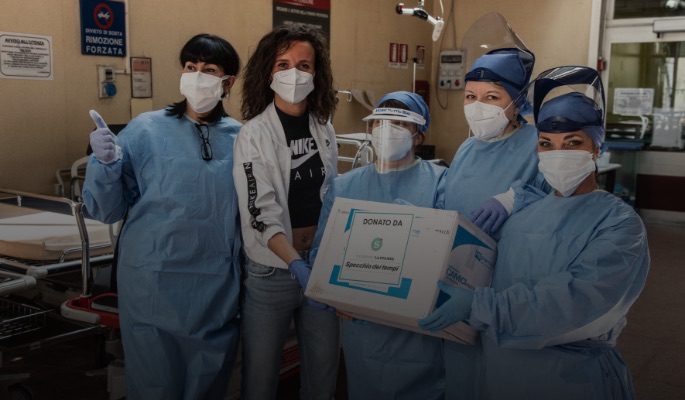 The battle against Covid

As in all emergencies Specchio dei tempi is present: immediately. To combat Coronavirus, the foundation raises over 10 million euros, with donations from 70 countries around the world immediately transformed into practical aid. In the first 100 days, one million items of protective equipment and dozens of machines are delivered to Piedmont hospitals; 17 thousand free grocery deliveries to families in need in six regions and 430 aid contributions to companies in difficulty in Turin, Cuneo and Sassari. Hundreds of sanitizing kits and 1000 tablets are supplied to schools, to encourage distance learning first and then recovery.